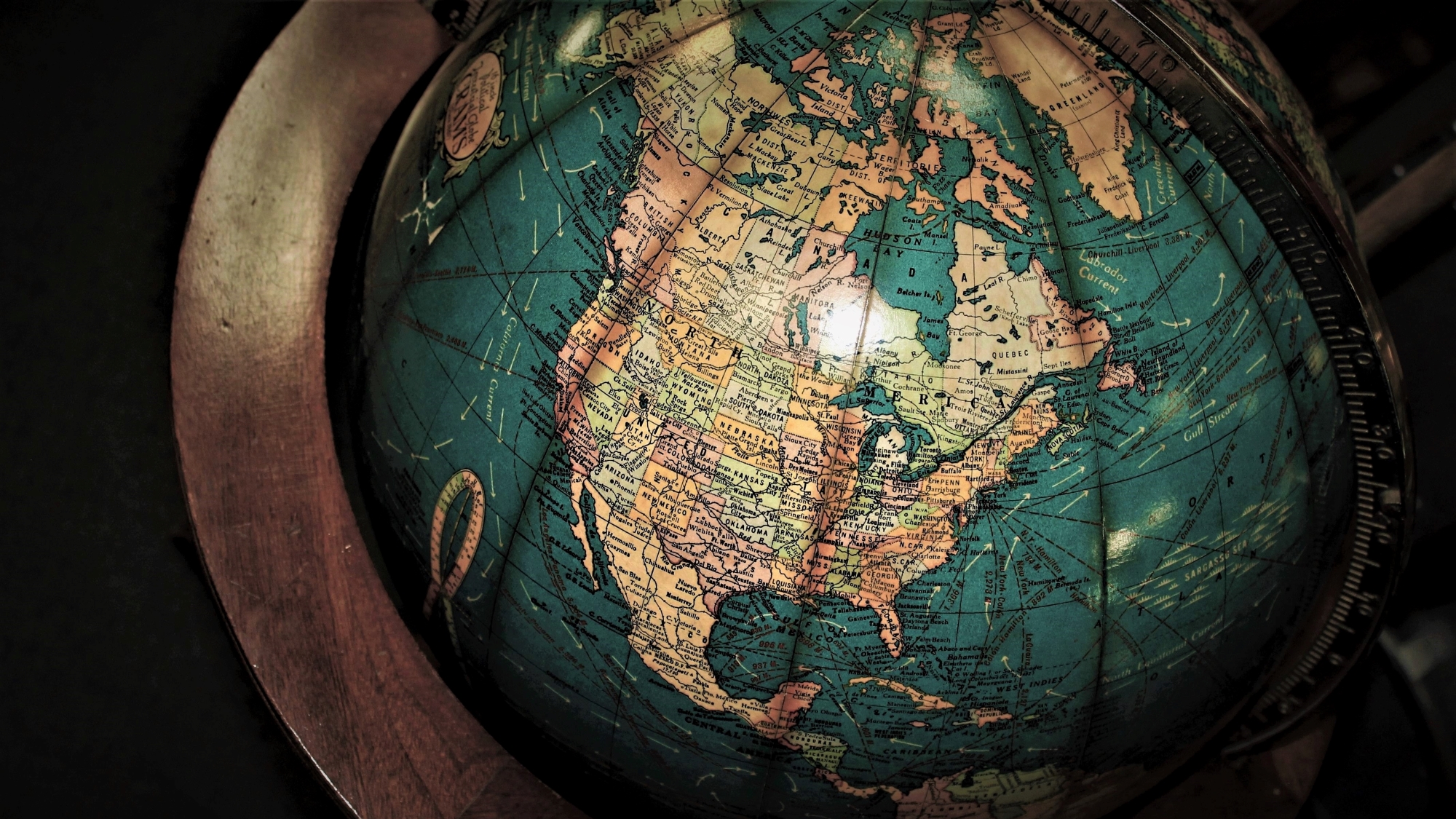 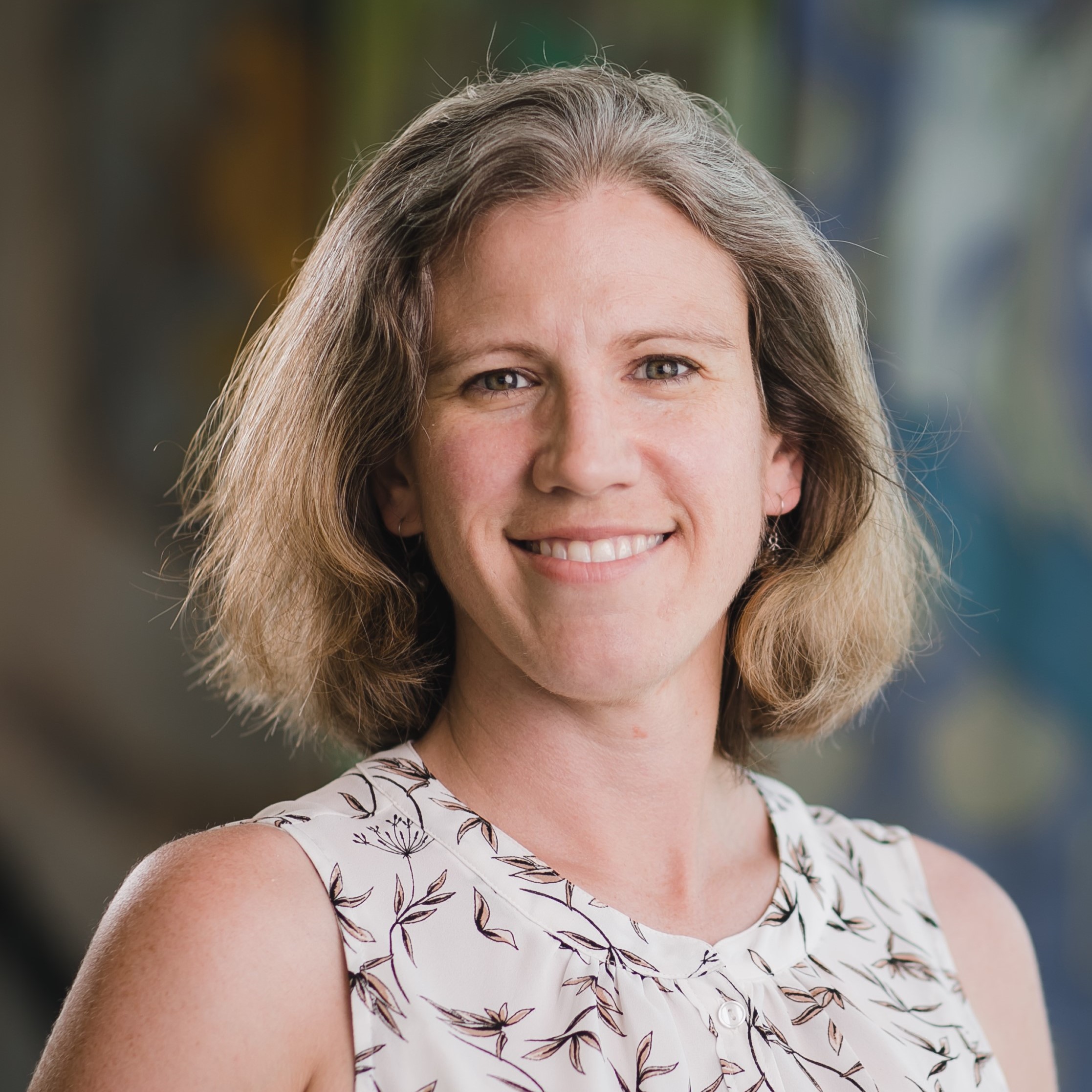 As technology and global commerce continue to shrink our world, we have an ever-greater need for people who can communicate across cultural boundaries. This involves more than simply speaking words that another person can understand. It requires learning to walk in the other’s shoes, taking the time to listen, considering and weighing different viewpoints, and cultivating genuine interest in people and places and customs and ideas that may be different from one’s own. At PCS, we seek to equip our students to impact their culture for Christ, and that culture is increasingly more diverse. The foreign-language classes at PCS offer students a unique opportunity to grow in empathy and love for their neighbors near and far as they expand their ability to communicate across cultures. 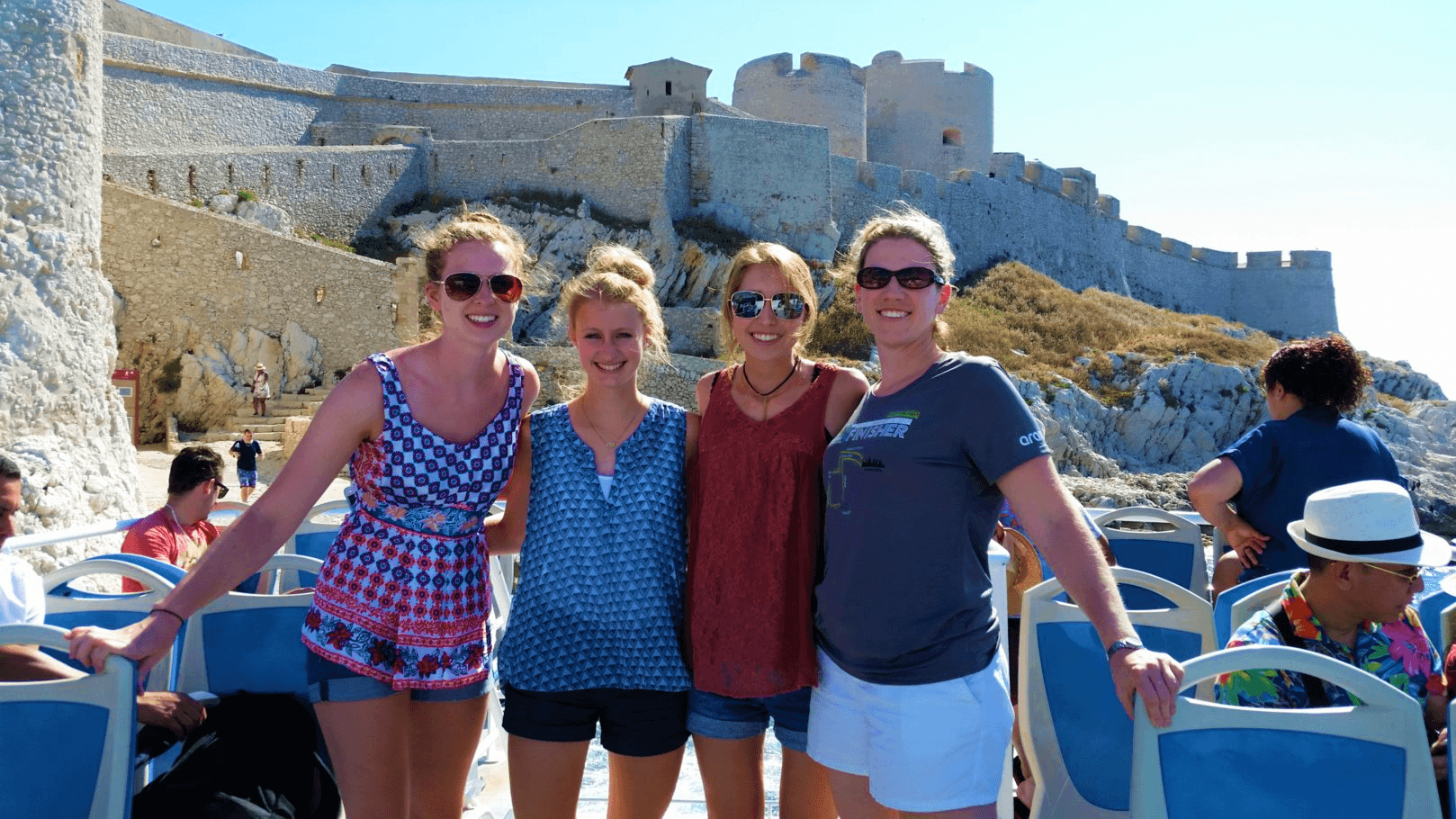 It is great to connect with former students abroad!
Current students met up with a PCS alumna studying abroad during the 2017 France trip.

“God used . . . the communication skills he gained in his foreign-language classes to open a door for him to share the gospel with a young man on another continent.”

The experience of PCS Class of 2011 graduate Jake Carr illustrates the impact PCS foreign-language instruction can have. Jake traveled with me and several of his classmates to France the summer after graduation. Following the Italy Trip, students who have continued studying French through their senior year have the opportunity to travel on to France, visiting Paris and Normandy for a true immersion experience. The students stay with different host families in the evenings and come back together during the day to explore cultural and historic sites as a group. One morning in Paris, Jake met the group with the biggest smile on his face. He explained that the night before, he had had a conversation with his host brother, a young man a few years older than Jake. Around midnight, the French young man opened the conversation by asking Jake why abstinence was such a big deal. Over the next three hours (yes, until 3:00 AM!), Jake was able to guide this conversation to a presentation of the gospel—all in French! He was ecstatic to see how God used his training at PCS in ethics and apologetics combined with the communication skills he gained in his foreign-language classes to open a door for him to share the gospel with a young man on another continent.

Jake is just one of many students who have benefitted from the foreign-language instruction offered in a classical Christian context at PCS. But what is it that makes this approach and context distinctive?1 It is often easy for people to imagine how to teach history or philosophy or even science from a classical Christian perspective, but subjects like foreign language seem invariable. Isn’t grammar just grammar? At the heart of classical Christian pedagogy, however, is the assertion that nothing is outside of God’s authority and influence. As Abraham Kuyper famously said, “There is not a square inch in the whole domain of our human existence over which Christ, who is Sovereign over all, does not cry: ‘Mine!’”2 This applies just as much to foreign languages as it does to scientific theories. 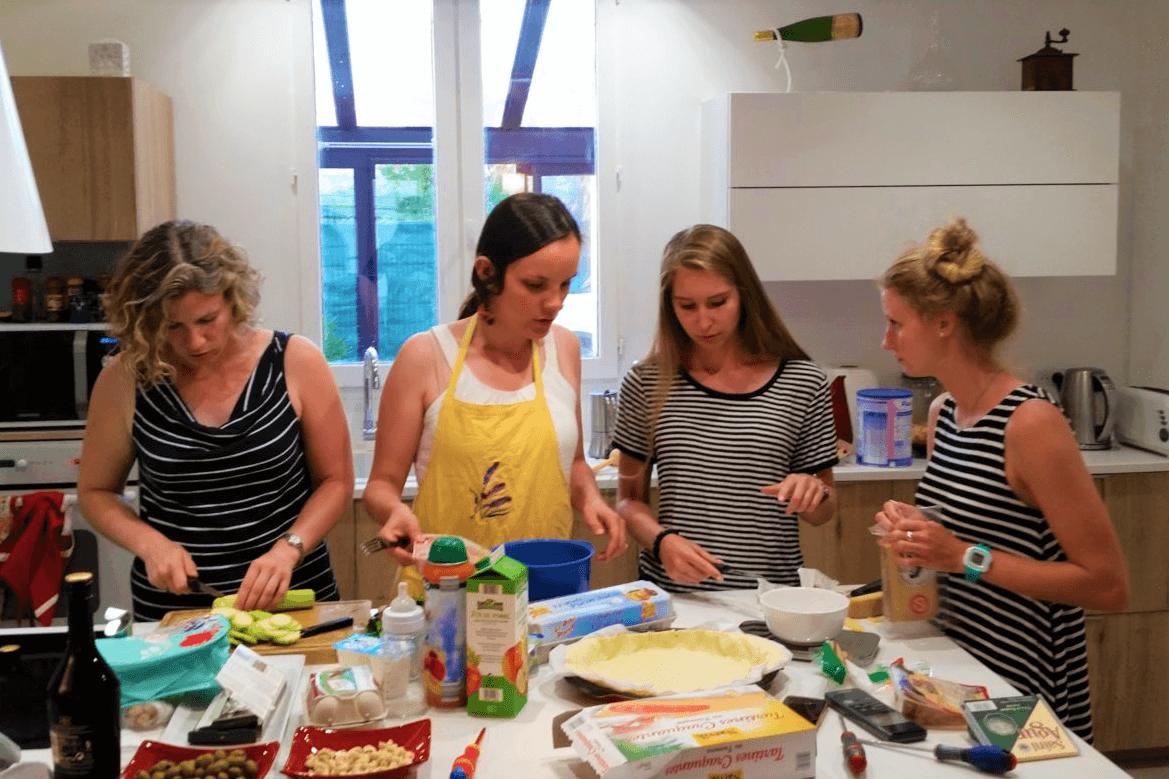 Class of 2017 girls making dinner with their French host family.

“Classical Christian foreign-language instruction, therefore, seeks to teach students to love God and His people more and to see Him at work through the study of other languages and cultures.”

Classical Christian foreign-language instruction, therefore, seeks to teach students to love God and His people more and to see Him at work through the study of other languages and cultures. At PCS, this begins with the study of Latin in third through ninth grades.3 In tenth grade, students have the opportunity to choose to continue to study Latin or to shift to a study of a modern language, either Spanish or French. In either case, students’ foundation in Latin enables them to advance very quickly through the basics of these modern languages. They already know that nouns can have gender, that adjectives must match nouns in number and gender, that verbs must be conjugated to agree with their subjects in person and number. And they understand all of the grammatical terms I just used! I remind my French students repeatedly that this foundation enables them to make six months of progress in the first six weeks of class. The first day, they learn their first verb, and by the end of three weeks, they can write a page about their families in French. Students feel a great sense of accomplishment in being able to communicate so much so quickly, and this is primarily thanks to their Latin foundation. 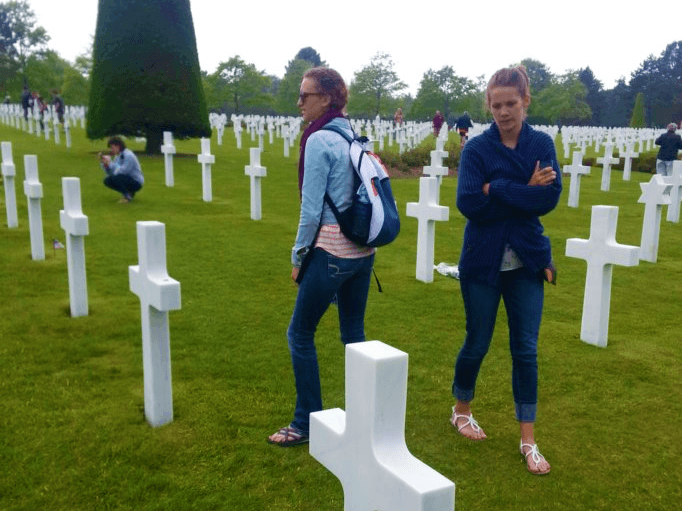 Class of 2013 students at the American Cemetery in Normandy.

“Communicating in a foreign language requires a great deal of patience, empathy, humility, and consideration of others.”

Whether it be through reading and translating Latin texts to engage in the great conversation with thinkers of the past, or through casual conversations over Skype with a pen pal in Mexico or France, the goal of studying foreign languages is communication. In their PCS language classes, students will learn conjugations and tenses and vocabulary, but more importantly, they will learn that communication is about imparting meaning. It is not enough to speak English with French words (ask a PCS French student what this means!). Instead, you must first know what you want to communicate and then learn how to express that in a way that the other person can understand. For this reason, communicating in a foreign language requires a great deal of patience, empathy, humility, and consideration of others.

It also requires an understanding of and interest in the other person’s cultural context. A different language comes from a different people with a different culture. Our mantra in class is, “It’s not weird, it’s different.” This statement is not an endorsement of the modern idea of tolerance, that all cultural practices are good and are not subject to value judgments. Some cultural traditions are morally reprehensible and should be called out as such; however, most differences between languages and cultures are simply that: differences. So often, we are quick to dismiss conventions and practices that are different as automatically inferior or worse than our own without taking the time to consider their origins or effects. Foreign-language courses at PCS encourage students to resist this urge, to instead take the time to examine differences between languages and cultures and allow these differences also to give us the space to critically examine our own culture. As Sean Dickard, an Upper School Bible teacher, challenges his students, “You cannot say, ‘I disagree,’ until you can say, ‘I understand.’” 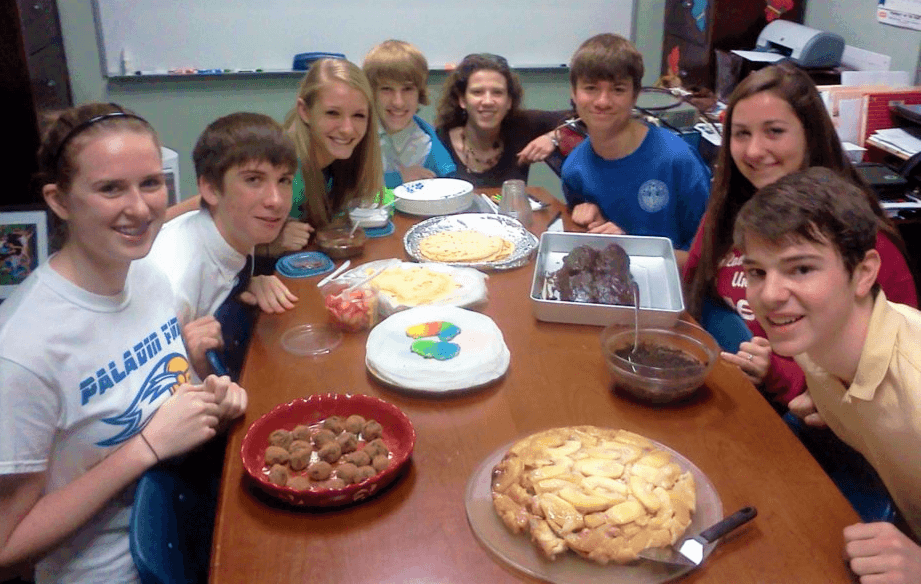 Former French I students (Class of 2015) with desserts they made themselves, following French recipes.

“Language is about communication, forging connections with one another grounded in godly compassion. To truly communicate, we must seek to understand each other.”

A year-long project in the PCS French I class gives students a unique opportunity to develop this perspective. At the beginning of the year, students choose a francophone country to research throughout the year. Options include former French colonies in the Americas, Africa, and Asia as well as countries like Switzerland and Belgium. As students learn to describe more about their own lives, they research these aspects of their country’s culture, as well. Students give presentations about the weather, seasons, holidays, food, clothing, daily life, and even the religious and political conditions in their countries—all in French—and finish the year with a summary presentation of all that they have learned. Students have been surprised and moved by the conditions they have discovered in their countries. Though economically prosperous, many European countries are spiritually dead, with lots of religious holidays but little spiritual devotion. Many other countries do not have universal running water or electricity, which results in very different daily life. Last year, one student researching Haiti was greatly saddened by the poverty she discovered and the fact that many girls her age are already in arranged marriages. This same student, however, concluded her presentation with hope, acknowledging that “Il y a de l’espoir pour Haïti! Haïti est très pauvre, mais il y a beaucoup de missionnaires Chrétiens qui présentent l’évangile en Haïti…Il y a beaucoup à être fait en Haïti!” (There is hope for Haiti! Haiti is very poor, but there are many Christian missionaries who share the gospel in Haiti…There is much to be done in Haiti!)

The hope for the people of Haiti is the same as our hope, and PCS students have already been inspired to serve there and in other countries around the world. One student told me that she chose to study French because she had become involved in missions in Haiti and wanted to be able to better communicate with the people she was serving when she returned. Another was able to sing worship songs that we learned in class with the children at an orphanage where she was serving. One young man chose to study Spanish for the same reason: he had been to Guatemala on a mission trip and wanted to be able to communicate more effectively with people when he returned. PCS graduate Hannah Weichbrodt (Class of 2009), spent several weeks in Togo as a college student working with women who needed micro-loans to establish self-sustaining businesses. She went on to serve with International Justice Mission for a year in India and now works as a lawyer in France, sharing the gospel through her life in relationships with others.

Language is about communication, forging connections with one another grounded in godly compassion. To truly communicate, we must seek to understand each other. We must be willing and able to listen, not simply be intent on speaking our minds. The foreign-language classes at PCS seek to communicate these truths to students through what and how we study and to equip students to use their communication skills for God’s purposes. May God continue to spread His gospel to every tribe and tongue and people and nation using students from PCS who have been trained to impact their global culture for Christ.

After these things I looked, and behold, a great multitude which no one could count, from every nation and all tribes and peoples and tongues, standing before the throne and before the Lamb, clothed in white robes, and palm branches were in their hands; and they cry out with a loud voice, saying, “Salvation to our God who sits on the throne, and to the Lamb.” — Revelation 7:9-10